Dreamhack Leipzig 2020: All you need to know 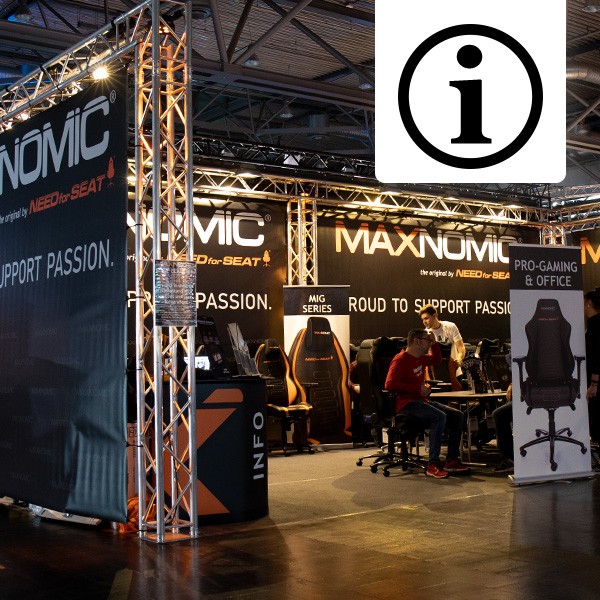 When is it happening?

Visit Us at DreamHack Leipzig 2020 at the DreamExpo

As a long term partner of DreamHack, we will not miss the chance to be part of DreamHack Leipzig 2020 again! We will welcome you in hall 4. stand 320 at our exhibition space. A huge MAXNOMIC® eSport gaming chair selection is waiting for you and our team is ready and available to give you some advice! It's your chance to try out the world's highest quality ergonomic gaming chair.

If you go for a new Maxnomic® chair and order it with us at our stand you won’t be disappointed! So come over and ask for our special DreamHack offer.

ESPORTS - What is happening?

There will be versatile tournaments for all age groups. Whether you want to watch the pros or prove yourself:

The major tournament Dota Pro Circuit (DPC) is starting its 13th season and will land at the gaming festival. 16 teams from Europe, America, and Asia will play against each other for a total of $1,000,000 in prize money. The Leipzig Major international qualification tournaments will take place during which teams can secure their place for the tournament.

After two years, CS:GO returns to Leipzig as an international tournament. The DreamHack Open Tournament at DreamHack Leipzig marks the start of a new series of tournaments organized jointly by DreamHack AB and the Electronic Sports League (ESL). DreamHack Open Leipzig will feature 8 up and coming CS:GO teams and a prize pool of $100,000.

Players of the popular agricultural simulator will compete over two days. On the first day, the teams that qualify at Germany's biggest LAN party will compete against the established Farming Simulator League teams. On the second day, the top 8 teams will play for prizes worth a total of €12,000 and league points that qualify them for the World Cup to be held in summer 2020.

3 nations, 12 teams, €50,000 in prize money and loads of days filled with action - all this awaits fans this year and next year at the national championships of Tom Clancy's Rainbow Six Siege - the GSA Nationals. Four teams will compete against one another at each of the major live events in Germany, Austria, and Switzerland to crown the national champions who will fight for the big title in the Clash of Nations at DreamHack Leipzig 2020.

The entire tournament will also be broadcast live on Twitch: https://www.twitch.tv/rainbow6de

The best smash players from all over Europe will meet again to determine who is the greatest. This is the only European Smash Circuit event in Germany.

The tournament is organized by local gaming and tournament organization eJousting and is capped at 256 Players.

Since the start of the winter semester, university teams from all over Germany have been battling it out to see who will be the new Uniliga champion in both highly competitive League of Legends and Rocket League tournaments. Finalists will face each other on January 25, 2020, for the final battle of the Uniliga Winter Finals on the DreamHack Leipzig Main Stage for prizes worth €12,000. There are 19 university teams from all over Germany who have qualified for the first round of the League of Legends winter season 2019/2020.

All streams will be available on the official Uniliga channel: https://www.twitch.tv/uniligagg

DreamHack Leipzig is also known as Germany's largest LAN party. This is where from Friday to Sunday you can meet and play with all your friends, and meet new ones at the same time. At least 2,000 LANers are participating and playing with their own hardware! Of course, they also got the opportunity to rent a comfy MAXNOMIC® seat and get this one with a special DreamHack discount after the weekend. If you want to get more information about the LAN seats and the purchase after the LAN party, kindly ask our friendly staff at the Exhibition area while visiting our MAXNOMIC® booth.

Let yourself be enchanted when our breath-taking cosplayers enter the stage. Let your creativity run wild in our new Creative Corner. Or just let your soul dangle in the dark moon fair. An expert jury consisting of well-known cosplayers will select the winners at DreamHack Leipzig on 25 January 2020. High-quality prizes will be awarded for the best costumes.

We look forward to seeing you!